After we dated for more than a couple of years, I knew I wanted to marry Karen. As our lives grew closer, I wanted to permanently join our lives together and start a family with her.

I forget exactly when, but I followed through on the tougher aspect of the proposal: asking Karen’s father, Terry, for his blessing to marry his daughter. It was time for us to spend some time together. We were due for a lunch and we enjoyed Streets of New York pizza–his favorite– to catch up.

I’m sure that Terry knew I wouldn’t drive 45 minutes out of my way only for chit-chat. With three adult children, he probably had an idea what the underlying motive was behind this lunch. Being a father, he is protective of his daughter. It was kind of intimidating to ask because I know I’m far from perfect. After I polished my pizza and salad, I finally asked him for his blessing to marry his daughter and he practically said yes before I finished my question. In all seriousness, he was supportive and entrusted me to love and protect Karen for life. I told him I was hoping to propose “this summer” giving myself some flexibility to find the ring and the right opportunity to ask.

We purchased a house together on April 22, 2016, and we discussed what ring styles she liked while browsing Brilliant Earth. After narrowing down some ideas, I began my search for the ring. I didn’t want just any engagement ring, but the one that will always brighten her day every time she glances at it. After getting sized for a wedding ring, I knew exactly what to get.

It is important for us to support our local economy, which is why I decided to shop in town, despite the convenience of shopping over the web. Following a “late day at work” on Friday, September 2, 2016, I visited Ganem Jewelers to find the perfect engagement ring. I originally intended to surprise her before my 31st birthday, but the perfect ring was unavailable. I knew she would like–but wouldn’t love–the rings that they had available, but they offered to make a custom ring based on my photos and specifications. She didn’t know that I put in the order for her ring.

My sales associate and I exchanged emails and she kept me informed on the progress of the ring including photos of the final product. I left work early to pick up the ring and it was perfect! It was exactly what I expected. I then stowed it securely in my trunk hoping that Karen wouldn’t find it when we went grocery shopping. Luckily, we were able to take her car to pick up groceries and she never knew.

Monday, October 10, 2016, was Columbus Day and it was the perfect opportunity to surprise Karen. I went with our usual Monday morning ritual by getting ready for the day like any other Monday. She went to work while I had something else in mind. I was planning to make this day one of the greatest days of our lives. Given the fact that she probably didn’t want an extravagant proposal, I decided to propose at our favorite place, home. She would know something was up if we went out of our way to a fancy location.

After running around all day to get roses, chocolates, and a music playlist, I set everything up for when she arrived home. I started the music and waited anxiously for her arrival. 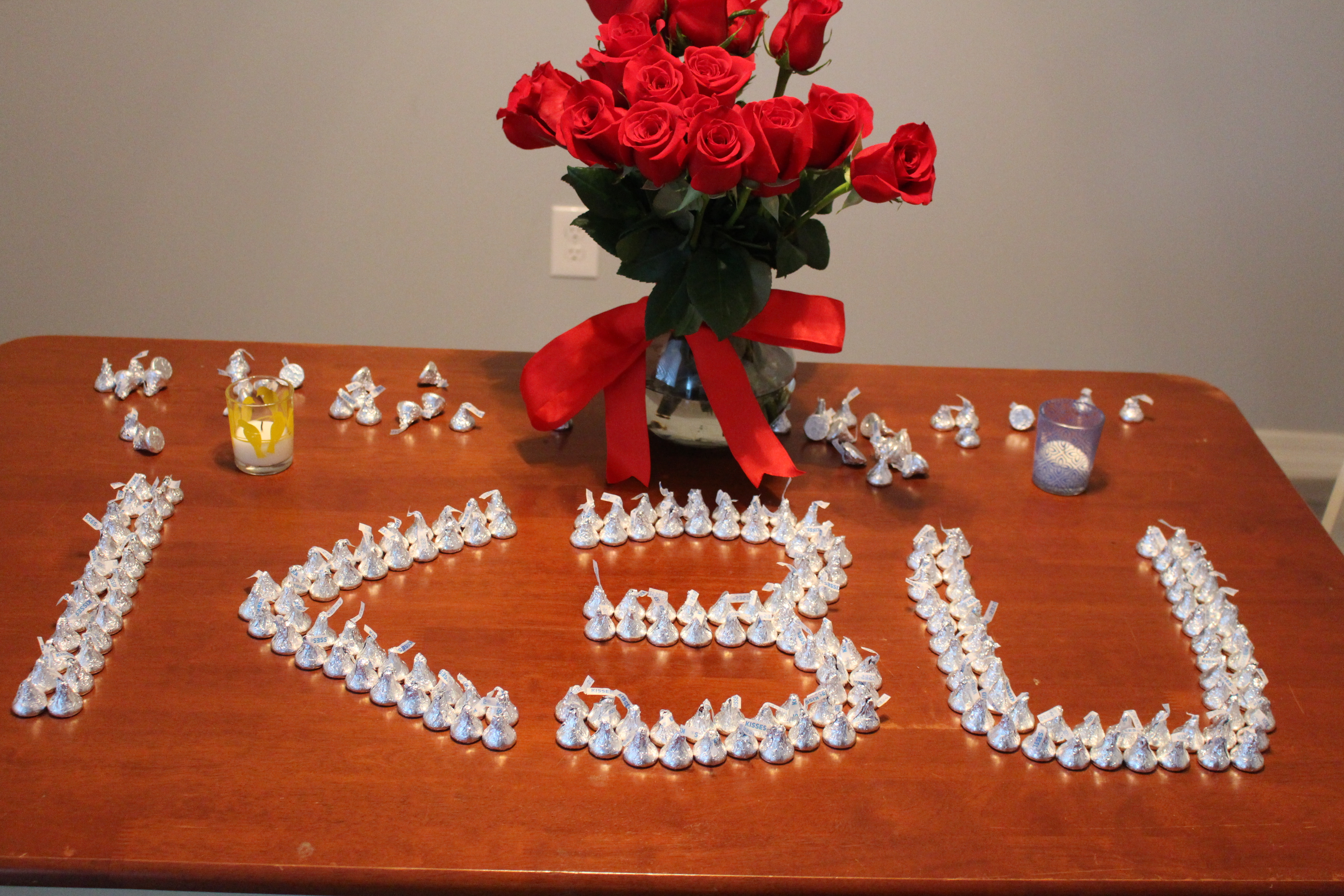 I left a trail of Hershey’s Kisses from outside the front door all the way into the dining room hoping to lead her to where I would ask her to be my wife. I had spelled out on the table “I <3 U” (I love you) in Kisses on our dining room table knowing that she would probably spend a little time figuring out what was up. It took longer to set up than you might think because the letters need to be consistent, but I eventually got it right.

When she pulled into the driveway, I lit the candles hoping they wouldn’t catch the house on fire and I hid in the hallway with anticipation. I wanted to see her initial reaction to my display of chocolates and roses.

I entered the room with a special little box in my pocket. After telling Karen how much she meant to me, I dropped to one knee and asked her to marry me. At that moment, I got all choked up and couldn’t think straight, but she said yes and after laughing/crying, she reminded me to put the ring on her finger. It was a beautiful moment. The ring was the exact cut that she liked and it was totally worth it to see her light up with joy. 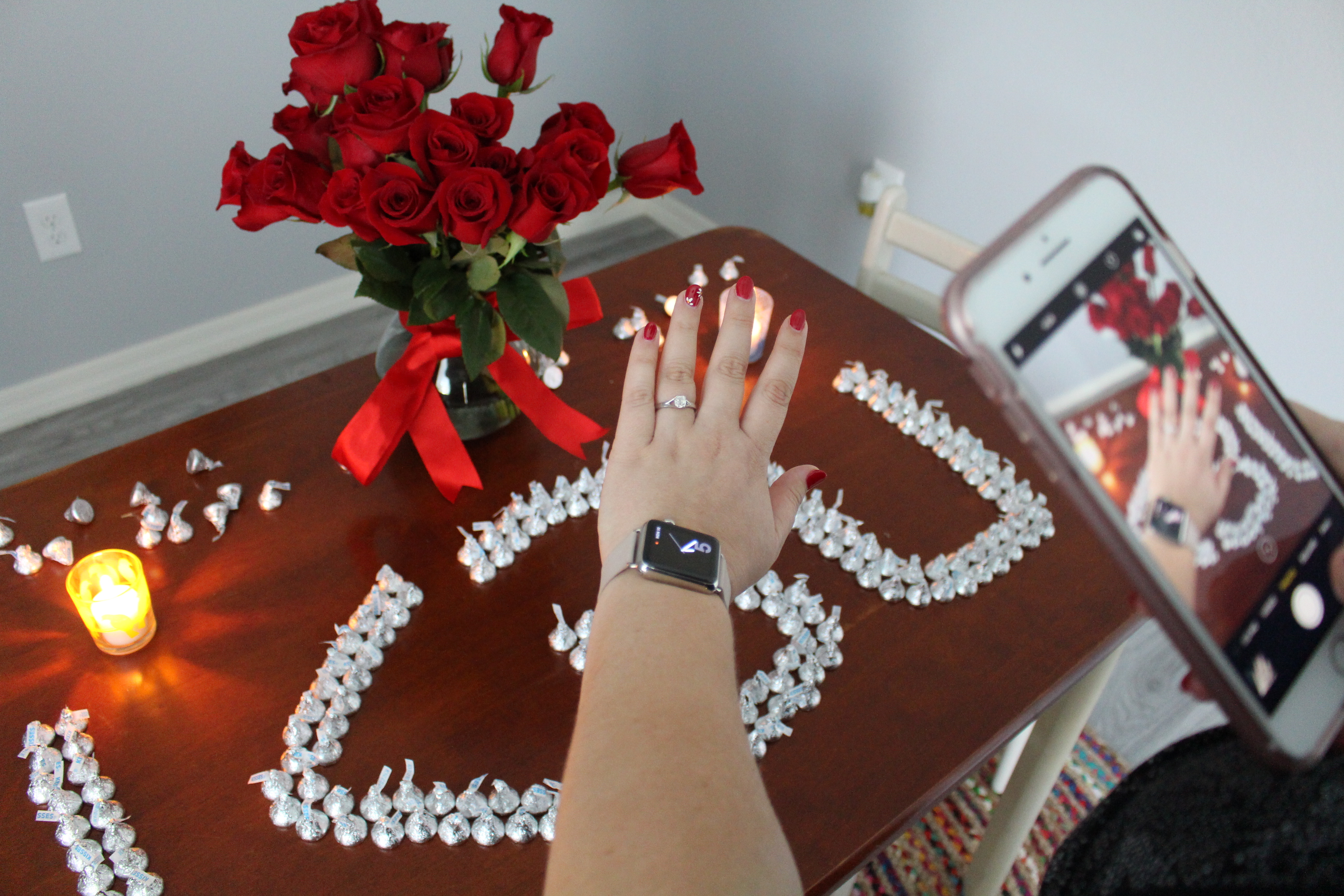